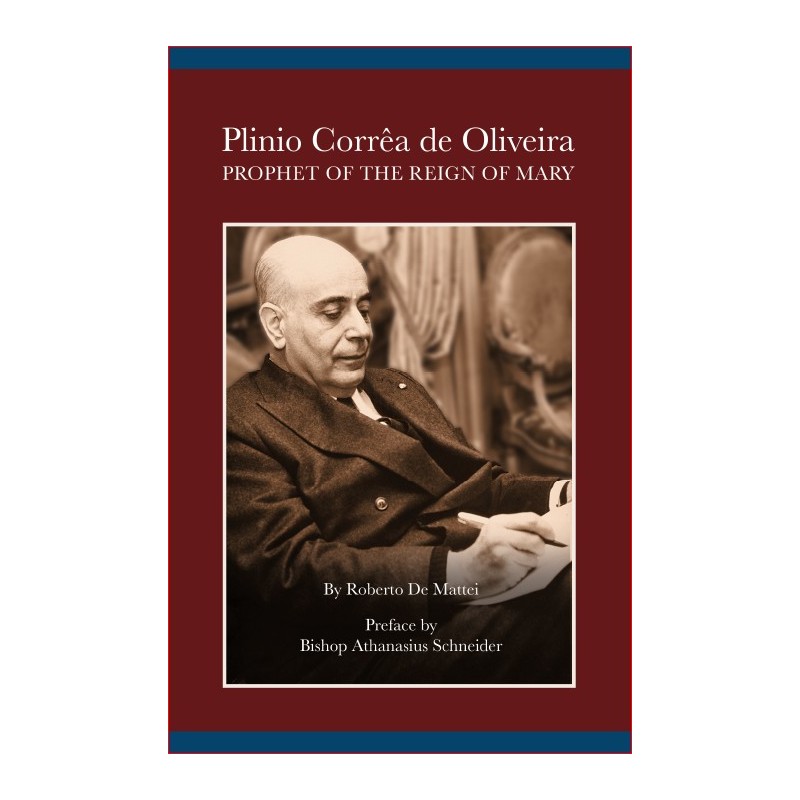 Plinio Corrêa de Oliveira: Prophet of the Reign of Mary

Beginning in Part I with an analysis of “The Philosophical School,” Prof. De Mattei shows Dr. Plinio not only as a faithful disciple of St. Thomas Aquinas, but also as one who uniquely applied St. Thomas’s principles to the crisis confronting the Church in our time.  Those principles are rooted in a realism that opposes the modern ideologies, in the hierarchical order of creation that constitutes its sacrality, and which is, therefore, the opposite of the egalitarian anti-metaphysics characterizing the Revolution against Christian Civilization.

Part II of this study analyzes the spirituality that is the foundation of Dr. Corrêa de Oliveira’s life and work.  It is a spirituality that contemplates the hierarchy and sacrality of creation leading ultimately to God Himself.  Rooted in the love of God as the ultimate Good, it is therefore opposed to all evil and therefore inspires a spirit of combat that historically found its expression in Chivalry. Finally, this spirituality is Marian, for it is Our Lady who manifests this hierarchy, this sacrality, and combativity to a supreme degree.

With these foundational principles, Prof. De Mattei analyzes in Part III the philosophy and theology of history to which the thought and spirituality of Plinio Corrêa de Oliveira logically lead. Describing the historical revolt against Christian Civilization, Dr. Plinio gave it the name by which Catholics in the past had already called it – the Revolution.  Initially analyzing the Three Revolutions against the Church and Christian society, Dr. Corrêa de Oliveira ultimately showed how these led to the Fourth and Fifth Revolutions and ultimately to the cult of the devil.

Finally, in Part IV, Prof. De Mattei shows that the triumph of the Immaculate Heart, promised by Our Lady of Fatima, inspired the lifelong work of Dr. Plinio, and he explains why it merits giving Dr. Plinio the name suggested by the subtitle of this work – Prophet of the Reign of Mary.  His doctrinal and historical arguments, deeply rooted in Catholic Tradition, amply justify the recommendation given to this book by Bishop Athanasius Schneider, in His Excellency’s Preface to the book.