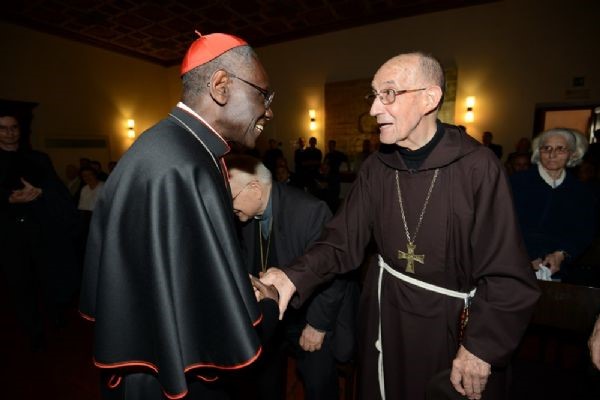 In its November 15, 2020 issue, page 15, The Remnant published a review of Bishop Laise’s book on Communion in the hand. The author, Amanda Evinger, cites the original title of the book, Communion in the Hand: Documents and History, rather than the expanded version published the year before Bishop Laise’s death, Holy Communion. This new title also includes two subtitles, the first being that of the original title, and the second highlighting the new section that Bishop Laise added in the final edition, Some Reflections on Spiritual Communion and the State of Grace.

Although incomplete with regard to the final edition of the book, The Remnant review is a concise and accurate analysis of Bishop Laise’s original study, on distributing Communion in a manner that decreases respect for the Real Presence in the Holy Eucharist, compromises the distinct roles of priest and laity, and exposes the Sacrament to desecration – such as letting particles of the Sacred Host fall to the floor, where they can inevitably be walked upon. The second section in the final edition of the book was added to expose the dangers of receiving Holy Communion unworthily, which the Church guarded the faithful against throughout her history, in particular through recommending the practice of spiritual communion. This practice emphasizes the proper interior dispositions necessary for the reception of Holy Communion sacramentally, and becomes an important means of grace when sacramental Communion is not possible.

In her review of Bishop Laise’s book, Amanda Evinger skillfully summarizes the manner in which Communion in the hand spread, against the explicit wishes and guidelines of Pope Paul VI:

It became rampant when representatives of episcopal conferences did not examine the official legislative texts on the subject carefully, and began to introduce the practice on a widespread basis, overlooking the strict requirements imposed by the Holy See for the purpose of limiting its use. As a result this practice became almost universal, which is the very situation that Rome emphatically wanted to prevent.

The way the episcopal conferences proceeded was revealed recently by Italian theologian Msgr. Nicolas Bux, in an article that we recently posted in English and Spanish translations, Msgr. Bux explained how the granting of permission to episcopal conferences, while disregarding explicit papal norms, came from within the Roman Curia. As a result the practice became so widespread that it was virtually impossible to stop. Then in 2020 came the coronavirus pandemic, which became an occasion for many bishops to bypass the Church’s liturgical law even more, in an attempt to compel more and more of the faithful to receive Communion in the hand.

A most recent example of this development came from a letter issued from the Congregation for Divine Worship, which, as has been wisely pointed out by Pete Baklinski on LifeSiteNews, was lacking the signature of the Prefect of that Congregation, Cardinal Sarah. The letter seeks to attribute to a previous text, issued by Cardinal Sarah, the authorization for bishops to impose Communion in the hand for medical reasons. However, as LifeSiteNews points out, this is not what Cardinal Sarah had stated. It is in this way that there has been a continual evolution of the liturgical guidelines, in a manner completely violating not only the letter of the law but also the explicit papal intentions behind the law. It is this spirit that prompted Bishop Laise to characterize this practice as “the triumph of an act of disobedience,” as quoted by Amanda Evigner in The Remnant’s review.

When shepherds within the Church disobey the Church’s own laws, the simple faithful are not obliged to follow in that disobedience. LifeSiteNews provides examples of statements by two prominent laymen who manifest their refusal to accept this liturgical practice, which violates the laws of the Church and shows disrespect for the Holy Eucharist.

The first statements were those of Dr. Peter Kwasniewki, and were posted by LifeSiteNews along with their report on the letter from the Congregation for Divine Worship. Dr. Kwasniewski described the Congregation’s letter as “most unfortunate,” and he explained his reasons why: “It undermines the universal norms and tradition of the Church, reiterated many times, concerning the most appropriate and reverent manner for receiving the Holy Eucharist.” And then LifeSiteNews concludes:

Kwasniewski said the Congregation’s letter to Bishop Stika “far from being the end of this discussion, indicates instead the ill-informed and confusing advice the faithful are receiving from the hierarchy today.”

He cautioned Catholics about the decision, saying that they “cannot be obliged by anyone on earth to violate tradition, law, common sense, conscience, and medical evidence.”

The second statement provided by LifeSiteNews is that of former EWTN News president Dan Burke, cited in an article posted along with a video with John-Henry Westen. Mr. Burke contracted the coronavirus and recovered from it, and yet he does not see the pandemic as a justification for imposing Communion in the hand on the faithful.

“I've come out of this with a resolute resoluteness,” Burke told Westen. And that is, “to cry out to the laity to repent and to stop desecrating Christ. Stop receiving him in a matter that is destructive, that allows for the stealing of the host, that allows for the dropping of particles, and the trampling of the Lord under our feet!”

The article ends with a reference to Cardinal Arinze, former Prefect of the Congregation. “Burke also relayed a story about how Nigerian Cardinal Francis Arinze once told him that communion in the hand ‘has been a disaster.’”

In fact, it was reported by the Catholic Herald in February of 2018 that the current Prefect, Cardinal Sarah, had characterized Communion in the hand as part of a “diabolical attack” on the Holy Eucharist. How is it, then, if two Prefects of the Congregation for Divine Worship have had serious reservations about this practice, and if the original norms that have never been abrogated were issued precisely in order to prevent it from spreading, how is it that it has continued to spread nonetheless, in spite of this opposition from the Holy See? The answer can only be found in the general state of crisis in which Holy Mother Church now finds herself. And since the grace proper to the Holy Eucharist is the unity of the Mystical Body, the disrespectful treatment of the sacramental Body of Our Lord Jesus Christ is a reflection in turn of the passion now being endured by Our Lord’s Mystical Body the Church.

Communion in the Hand: Documents & History