“A ‘branch theory’ has been devised as a compromise with which to satisfy the yearnings of many an aching heart. But, alas! without avail. We too hold a ‘branch theory,’ but the branch theory of which our Blessed Saviour spoke. Branches there are, and there must be, in the One Church, but not branches without a stem and cut off from the vine, with their leaves withered ‘High’ and ‘Low’ and ‘Broad.’ Our Lord spoke of such branches, and said: ‘If any one abide not in Me, he shall be cast forth as a branch, and shall wither’ [John xv. 6]. The Church is the mystical Body of Christ, and where Peter is, there is the Church, as the Fathers said of old.”

The Truth of Papal Claims: A Reply to "The Validity of
Papal Claims" of F. Nutcombe Oxenham, pp. 127-128

“…we can come together this day, Lutherans and Catholics…. What we’re doing…has not always been possible. The image of the vine and the branches in St. John’s Gospel was really not in control…almost as if our two traditions were two vines…or that some of the branches were missing.”


The above quoted bishops, a hundred and fifteen years apart, give two different interpretations of the words of Our Lord in St. John’s Gospel. At the First Vatican Council in 1870 the French prelate Bishop Dupanloup, along with some other bishops, proposed that the Mystical Body of Christ is larger than the Catholic Church, but that theory was not adopted by the Council Fathers. The First Vatican Council was not able to promulgate its prepared decree on the Church, but subsequent Popes in two encyclicals defined the nature of the one true Church. Pope Leo XIII in Divinum Illud in 1897 wrote that the Holy Spirit is the Soul of the Mystical Body the Church, and Pope Pius XII in Mystici Corporis Christi in 1943 explained that the Catholic Church alone is the Mystical Body, and that the Holy Ghost is the Soul of this living Body of Christ. Non-Catholic denominations therefore are branches that are cut off from this Vine which is Our Lord Jesus Christ. And, as Our Lord Himself explained, a branch cut off from this Vine withers and dies.

Pope Pius XII further warned that the eternal salvation of non-Catholics is endangered precisely because they do not have the full means of grace that are available within the Catholic Church alone. The Lutherans whom Bishop Malone was addressing, for example, are lacking the priesthood, the Holy Sacrifice of the Mass, and the Sacrament of Penance. The true charity that Catholics show to Lutherans is not one of ignoring these truths, but rather that of explaining to them that only the Catholic Church can be their true home. 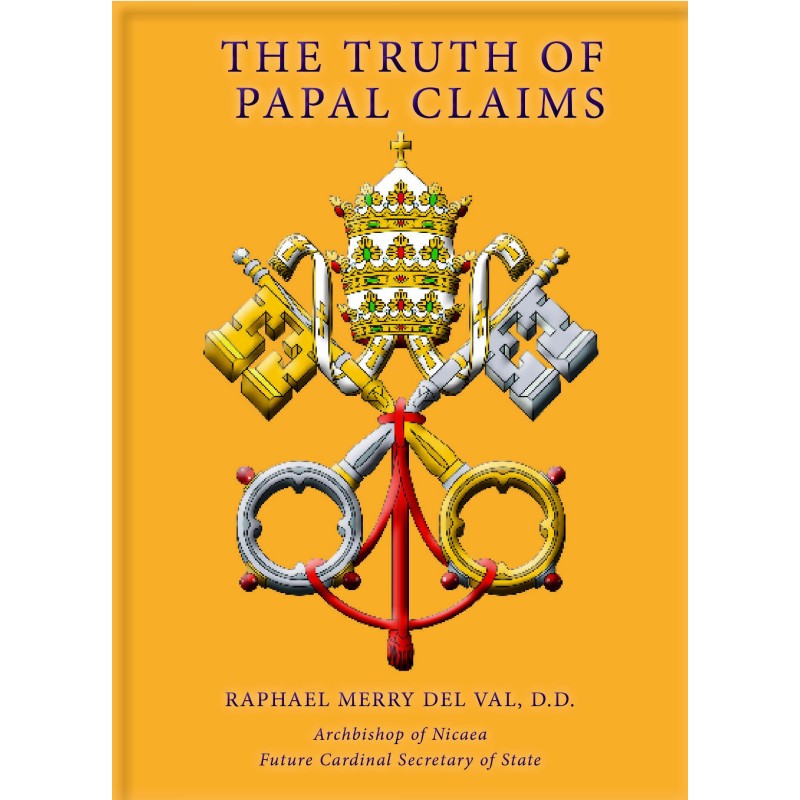 Cardinal Merry del Val’s 1902 book The Truth of Papal Claims was written in response to an Anglican theologian in Rome who was challenging Catholic teaching regarding papal authority. Sacred Scripture, the Fathers of the Church and the Ecumenical Councils are all brought together in this book to show that the Catholic Church alone possesses the living branches, and the Vine which is Our Lord Jesus Christ is His Mystical Body, the Catholic Church.


“The Truth of Papal Claims, by Raphael Cardinal Merry del Val, which Preserving Christian Publications has recently reprinted . . . is a worthy edition of an important Catholic work.”

Cardinal Merry del Val on
the Authority of the Pope

“Hence Dr. Oxenham may learn, that by Infallibility we do not mean ‘impeccability’ or sinlessness in the person of S. Peter or of his successors, who are accountable to God for their own consciences and their own lives like every other human being; ... we do not mean that the Roman Pontiff receives special revelations from heaven, or that by a revelation of the Holy Spirit he may invent or teach new doctrines not contained in the deposit of Faith, though, when occasion offers, and especially in times of conflict, he may define a point which all have not clearly recognized in that Faith, or which some may be striving to put out of view. Nor do we mean that every utterance that proceeds from the Pope’s mouth, or from the Pope’s pen, is infallible because it is his. Great as our filial duty of reverence is towards whatever he may say, great as our duty of obedience must be to the guidance of the Chief Shepherd, we do not hold that every word of his is infallible, or that he must always be right. Much less do we dream of teaching that he is infallible, or in any degree superior to other men, when he speaks on matters that are scientific, or historical, or political, or that he may not make mistakes of judgment in dealing with contemporary events, with men and things” [pp. 18-19].

The above statement in 1902 of Archbishop Rafael Merry de Val was his answer to the Protestant theologian in Rome, F. Nutcombe Oxenham, who challenged Catholic teaching on the authority of the Pope. He summarized the Anglican chaplain’s position as follows: “…Dr. Oxenham imagines, like so many other Protestants, that the Catholic doctrine of the infallibility of S. Peter and of his successors implies impeccability, which no Pope, no Council, no Catholic theologian ever dreamt of asserting” [pp. 6-7].

“Does Dr. Oxenham imagine that even today a Bishop might not expostulate with a Pope, who, in his judgment, might be acting in a way which was liable to mislead those under his own charge . . . ? The hypothesis is quite conceivable, and in no way destroys or diminishes the supremacy of the Pope. And yet an individual Bishop does not occupy the exceptional position of S. Paul, a fellow-Apostle of the Prince of the Apostles. Even a humble nun, S. Catherine of Siena, expostulated with the reigning Pontiff, in her day, while fully acknowledging all his great prerogatives” [p. 74].

“We may conclude this argument with another text from S. Chrysostom, who again steps in to refute Dr. Oxenham’s views about S. Peter. ‘Observe his (Paul’s) prudence,’ writes that Father of the Greek Church, ‘he said not to him (Peter), thou dost wrong in living as a Jew, but he alleges his (Peter’s) former mode of living, that the admonition and the counsel may seem to come, not from Paul’s mind, but from the judgment of Peter already expressed. For, had he said, thou dost wrong to keep the Law, Peter’s disciples would have blamed him, but now, hearing that this admonition and correction came, not from Paul’s judgment, but that Peter himself so lived, and held in his mind this belief whether they would or not, they were obliged to be quiet’ [Hom. in loc.]’ [pp. 74-75].

Specializing in Used and Out-of-Print Books