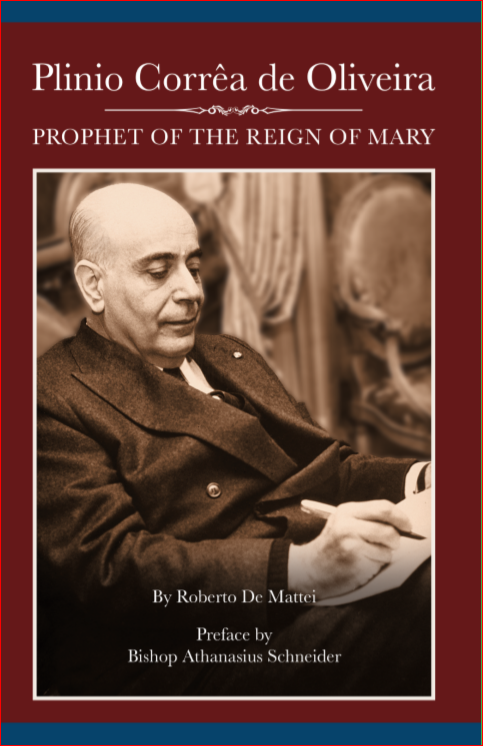 After we first announced the publication of Plinio Corręa de Oliveira: Prophet of the Reign of Mary by Roberto de Mattei, we received an email from a priest of the Society of St. Pius X, mentioned in a previous article. His email referred to a disagreement that Bishop Antonio de Castro Mayer had with Dr. Corręa de Oliveira, after having supported his work for more than four decades. The reasons behind this disagreement are also those of some members of the FSSPX, and therefore we can better understand them by turning to Bishop Bernard Tissier de Mallerais of the FSSPX, who wrote two articles for The Angelus on Catholic Action. The second article, of October 2011, began with the suggestion that Bishop de Castro Mayer interpreted the lay apostolate of Catholic Action in a certain way to counter “deviations of the TFP.” However, Roberto de Mattei, in his earlier work Plinio Corręa de Oliveira: Crusader of the 20th Century, points out that when Dr. Corręa de Oliveira and members of the TFP went to Rome during the first session of the Council, where they assisted Archbishop Lefebvre, Bishop de Castro Mayer, and other like-minded bishops, they shipped trunks of literature by sea, and in particular Bishop de Castro Mayer’s 1953 Pastoral Letter on Problems of the Modern Apostolate, and Dr. Plinio’s book Revolution and Counter-Revolution.

The doctrinal position that Bishop de Castro Mayer took in that pastoral letter was identical to that of Dr. Plinio. The disagreement only came later. To understand how the disagreement developed, and in the context of the articles of Bishop Tissier to Mallerais, we must focus on the very different circumstances that the Church faced in Bishop Tissier de Mallerais’ native France, on one hand, and in Brazil, on the other hand. French Catholics had become divided over the condemnation of the movement Action Française by Pope Pius XI, the same pope who introduced the specific form of Catholic Action that Bishop Tissier de Mallerais was critically analyzing. Some saw Pius XI’s Catholic Action as being at odds with what they believed was a more Catholic political orientation within the ranks of Action Française.

One of the fundamental errors that progressives were introducing into Catholic Action in Brazil was the blurring of the distinction between the priesthood and the laity. For this reason Dr. Plinio’s book was not only a defense of the lay apostolate according to the mind of the Church, but also a defense of the priesthood and the hierarchical nature of the Church. Related to this error, which the book refuted, was another error that advocated a false understanding of the liturgy and general Catholic piety. It promoted an attitude that Dr. Plinio referred to as “liturgism,” the thinking that mere participation in the liturgy was sufficient for progress in the spiritual life, and that traditional practices of asceticism, and various private devotions, were no longer necessary.

Even though Dr. Plinio’s book was published with a preface by the papal nuncio to Brazil, it met with opposition from some of the Brazilian bishops. When he and his associates were accused of opposing episcopal authority as a result, it was Canon de Castro Mayer who came to their defense, by pointing out that bishops acting individually are not infallible. But that did not stop the opposition from gaining momentum, and soon both Canon de Castro Mayer and Dr. Plinio were removed from their positions in Catholic Action. It was a temporary setback for the traditional Catholics in Brazil. However, the Vatican Secretariat of State sent a letter praising Dr. Plinio’s book. Canon de Castro Mayer, along with another priest closely associated with them in the controversy, Father Geraldo de Proença Sigaud, were both made bishops by Pope Pius XII. Furthermore, Pius XII issued his encyclical Mediator Dei, containing points of doctrine that clearly vindicated the positions taken by Dr. Plinio in his book, and Pius XII also issued the apostolic constitution Bis Saeculari, on Catholic Action and the Sodalities of Our Lady, further strengthening the position that had been taken by the two new Brazilian bishops and Dr. Plinio.

On these points of doctrine, Bishop de Castro Mayer and Plinio Corręa de Oliveira were completely in agreement. And their collaboration was so manifest during the Second Vatican Council, where they worked together to defend traditional doctrine against the influences of the new theology, that Archbishop Lefebvre in one of his books, They Have Uncrowned Him, acknowledged the assistance that the traditionalist bishops had received from the TFP. How then did a dispute arise a decade and a half later, between some members of the traditionalist clergy and the TFP, that led Bishop de Castro Mayer to end his support for Dr. Corręa de Oliveira? The answer lies in the development of their understanding of a point of Catholic doctrine on which they had essentially agreed. Pius XII’s encyclical Mediator Dei emphasized the central importance of the Church’s liturgy in the spiritual lives of Catholics. At the same time he opposed the misconception that would reduce this spiritual life to the mere physical participation in the Mass and in the reception of the Sacraments. The spiritual lives of Catholics require the full living of the Catholic life, with other practices of piety and asceticism, and the fulfillment of the duties of one’s state in life.

From these two principles – the importance of liturgical practices on one hand, and the practice of other works of piety and asceticism – two distinct schools of spirituality developed among traditionalist Catholics through the course of the present crisis. The first was a priestly spirituality, led by the Society of St. Pius X, which emphasizes that all graces depend upon the Sacrifice of the Mass, as offered by the priest. The second was what Roberto de Mattei, in Part II of his book, calls the “Spiritual School” of Plinio Corręa de Oliveira, a spirituality proper to the laymen who work to defend a sacral Christian Civilization, as defined by the Popes of Catholic Action from St. Pius X to Pius XII. The school of spirituality represented by Plinio Corręa de Oliveira is the subject not only of Part II specifically, but of the entire book, a spirituality which at times has been the object of suspicion among certain members of the traditionalist clergy, leading some to doubt the orthodoxy of Dr. Plinio and the TFP that he founded. Prof. de Mattei’s comprehensive treatment, however, puts these fears to rest, for the book fully accomplishes the goal that the author set out to achieve – that of showing that Dr. Plinio’s life and work represented a total devotion to and defense of Catholic Tradition.

Prophet of the Reign of Mary